In stock
$8.00
Shipping Prices
Skip to the end of the images gallery 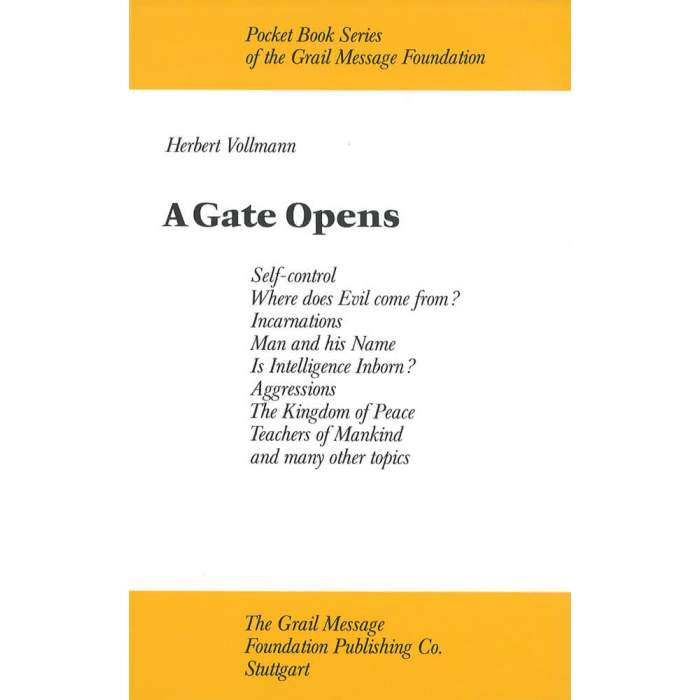 Following on the previous pocket books,
"The World, as it could be!"
"Knowledge for the World of Tomorrow!"
"What lies behind it …!"
there now appears a fourth pocket book, entitled "A Gate Opens".
These pocket books are intended to show how the building-bricks of the Knowledge of Creation which the Work "In the Light of Truth", The Grail Message of Abd-ru-shin, gives to men, can be joined together like mosaic pieces into a picture (theme), with the aim of a gladdening spiritual experience, if in being put together the picture has emerged complete.
May the essays worked out in this way stimulate to deeper reflection, above all about ourselves, without our falling at the same time into unhealthy pondering.
Then a gate may suddenly open which until now had remained closed, behind which emerges an ever brighter path that can lead unswervingly out of many oppressing errors, doubts and afflictions!

The majority decides, but not only with regard to elections and voting in the earthly realm. In the great Creation-Happening also it determines the way which mankind have to follow in their spiritual development, whether it be good or bad, leading into the Darkness or towards Luminous Heights.

But then it is unfortunately a sad fact that for thousands of years now the majority of mankind have chosen the way into the depth, and in their spiritual decline are drawing ever nearer to the abyss.

They would also drag with them the minority who are seriously striving for the good, if at the last moment God did not separate the evil from the good forever.

We are now in this time of the great sifting and purification carried out by the World-Judge. During this time every human spirit must reap what it itself has sown, whether it be good or bad works (Matthew 25,32 and Rev. 22,12).

Jesus prophesied about this End-Time. His words concerning it have been handed down to us by the Evangelists. Likewise John in his Revelation described the time of the great World Judgment, and the Cosmic Turning-Point which belongs to it.

For a long time man has allowed his intellect, which emanates from the perishable brain, to rule instead of his spirit. Through this he has been caught in the earthly-material, and separated himself from God.

But now, amid great upheavals and changes, the time of absolute dominion of the intellect is coming to an end. Regarded as a whole it has been an oppressive time, because for thousands of years mankind had to follow that way which was determined by the majority: the way into the Darkness, the road of hopelessness, of force, of oppression, of degradation.

This dark, lost majority, which has poisoned the whole life of men, will cease to exist in the World Judgment, as is proclaimed in the Revelation of John!

Then is the way clear for those human beings who are striving towards the Light. In the coming thousand-year Kingdom of Peace on earth God grants them the opportunity to continue and complete their spiritual ascent unhindered at last!

During these upheavals and changes the stars in their positions relative to one another play a decisive part. With their radiations they prepare the ways into the earthly, and loosen the soil for the new spiritual seed!